As we approach the end of the month, we are continuing to focus on Goal 11 of the Sustainable Development Goals, Sustainable Cities and Communities.

When we think of the term ‘future cities’ we might imagine flying cars and hover boards. A world where artificial intelligence is king and half of the human population is living on the moon. However, when building homes and infrastructure for the cities we live in, we need to be more realistic and prioritise effectively.

One of the biggest priorities at the moment is to build cities that provide space for communities to thrive. When putting together plans, developers are not only looking at the build, but taking into consideration the local communities, providing green spaces, community hubs and more. Hubbers TOWN are one such organisation.

TOWN is a developer and custom-build enabler established in 2014 by directors Jonny Anstead and Neil Murphy. Their mission is to make great homes, streets and neighbourhoods; places people love.

They work with larger funding and delivery partners who share their values to plan and enable large-scale developments in a master-development role, and directly deliver smaller, built projects of up to around 100 homes. 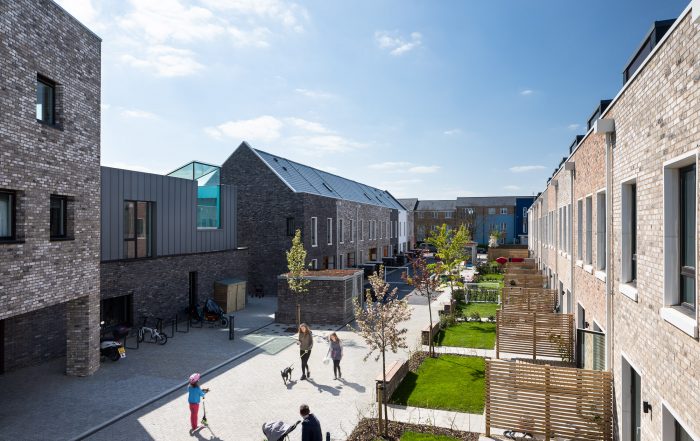 TOWN’s first development, Marmalade Lane Co-housing in Cambridge is a great example of this. It showcases their commitment to contemporary design and timeless character, as well as their ethos – to work alongside consumers to meet their needs and to challenge marketing and planning assumptions in the pursuit of better cities.

WHEN WE ASKED THEM HOW THEY MAKE SURE THAT COMMUNITIES ARE SUPPORTED BY AND BENEFIT FROM DEVELOPMENTS.

Here is what they said:

“We collaborate with existing – and, where possible, future – residents and users of the places we work to understand the issues facing them. The main objective here is to understand their needs, and in turn to help them understand the social, economic and environmental drivers behind development and our particular approach to it.

There is often a reaction against the prospect of development or redevelopment. Sometimes you can even see a “not in my backyard” mentality come to the forefront, which is understandable.

Sometimes this is for a very good reason. Places do face actual problems. eg. transport, pressure on public services or lack of access to play and nature. However, what people don’t always realise is that these are things that can be fixed by developers like us directly, especially if we try to understand these problems first.”

TOWN’S APPROACH IS MUCH MORE COLLABORATIVE THAN OTHER DEVELOPERS, AND THEY TRY TO SHARE THEIR APPROACH THROUGHOUT.

They put emphasis on walkable and cyclable environments, making neighbourly streets, cutting resource use, integrating social infrastructure with social housing (which could benefit established residents as well as newcomers), and ultimately curate places that encourage social economic diversity and inclusiveness.

These thoughts are further expressed through their vision for the future, not just here in London, but worldwide:

“Cities are the answer to the question; how do we live good lives in a post-carbon world. The challenge is to grow and densify cities more rapidly, so that the social and economic advantages of urban habitat are available to more people, while accelerating the shift away from fossil-fuel use. There is also a need to focus on liveability – greening the city to cope as best it can with a warming climate, and recognising that the problems with private vehicles in the urban environment are not just centred around emissions, but what you gain when you turn streets over to people and play.”

OVER THE LAST COUPLE OF WEEKS, WE HAVE SEEN THE IMPORTANCE OF HOW CITIES ARE BEING BUILT.

We have heard examples of organisations working towards providing affordable housing for all and seen how developers are encouraging engagement and participation in emerging spaces. But, there is still more to do. To truly create sustainable cities and communities we also need to be thinking about the resources we use and how this impacts the world around us.

Next month we’ll be focusing on SDG 13, Climate Action where we will be going into this topic in more detail. Until then, I’ll leave you with a quote from Aaron M. Renn (Urban Policy Expert).

– EVERYBODY DOES THAT RIGHT

– BUT HOW IT TREATS ITS ORDINARY ONES.”