Wouldn’t it be fantastic if governments existed to empower citizens into getting together, listening to each other’s dreams and ambitions and enable them to co-create them into reality? Well the government of Scotland did just that last year by starting a project promoting an online course called U.Lab.

At Impact Hub King’s Cross on 7th July, Kenneth Hogg, Director of Communities and Local Government in the Scottish Government joined us for a gathering where he told the story of U.Lab Scotland and how it has empowered grassroots projects for change.

The meeting was a chance for people involved in the U.Lab project from London and Birmingham Impact Hubs to hear and be inspired by what’s been going on North of the border.

So you may well be asking what is this U.Lab thing? The answer is it’s a MOOC, a massive open online course which in this case provides participants with a variety of tools for collaboration and social transformation using presence and deep listening.

Kenneth shared with us how he had done the initial run of the U.Lab course and felt it would be a good tool to enable citizens to turn ideas into action and transform Scotland themselves. He saw it as being perfectly aligned with the Scottish First Minister’s intention of an “outward-looking government, which is open and accessible to members of the public” So in the summer of 2015 he sent out a letter to his networks which attracted over 630 people over three preparatory events in which citizens shared what was on their hearts and what was important to them.

From those initial events the government encouraged U.Lab hubs to be formed all over Scotland and provided online platforms for them to connect. Over 70 hubs formed to work on diverse questions such as Community Resilience, Ageing as an Opportunity, Health and Wellbeing, Recovery, Organisational Change, Loneliness, refugee issues etc.

An important aspect of the U.Lab approach to change was highlighted by Kenneth: in a world in which seismic shifts are increasingly frequent, incremental change models don’t work. Rather than draw on what we already know, U.Lab is based on collectively sensing into the future as it emerges from the present. Reacting to the past using preconceived ideas and a “fixer’s” mentality are suspended and a group works together igniting their interests and passions to birth projects.

Kenneth shared with us how the core leadership competence is this ability to engage emotionally and relationally, that people don’t respond to logic: it’s the heart that literally moves us. So the way the Scottish government showed up was vital. He told us they had to model the behaviours and spirit of this authenticity in everything they did. For example the need to be open and admit they were trying something new and bring policy issues into the spaces without telling people “we know the answer!”

Prior to Kenneth’s visit our U.Lab team at Kings Cross met to co-design the event. We wanted to hear what Kenneth had to share with us whilst allowing presence-based generative dialogue to emerge as much as we possibly could. So into the small space of the boardroom we invited members of Brixton and Birmingham U.Lab hubs to join us as well as other special invitees including Martin and Aggie Kalunga-Banda of the Presencing Institute. And once Kenneth had shared the Scottish U.Lab story we settled into reflective silence… 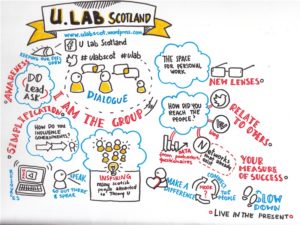 Graphic facilitation done during the meeting by Ieva Anciukevičiūtė

Re-emerging from the meditative moment we shared images, gestures, metaphors that encapsulated what we’d heard – a rising sun, a book with nothing but blank pages inside, a wave that was about to break etc. A strong, tangible and nourishing collective presence arose in the room as we shifted into dialogue sharing our insights around how this inspiring example from Scotland could influence the rest of the UK.  In a post Brexit scenario we felt opportunities for these new ways of collaborating could arise. Kenneth suggested that U.Lab had been a success in Scotland because it made use of existing networks and followed the energy of those that were already moving forward. Martin also felt that a major aspect of its success was convening power and that finding people who have it is very important to help such social innovations scale up.

The energy of the meeting was one of inspiration and hope. In spite of a limited 2-hour session our hearts and minds were engaged and new connections were forged for potential future collaborations. Coursing through us on that Thursday afternoon was the vibrant energy of a future system based on collective sensing and acting seeking to find its way into being through our deliberation.

If this whets your appetite you might be interested to know that a new U.Lab course will be starting soon in September. See the details here.

You can find out more about how U.Lab is being developed in Scotland here at www.ulabscot.wordpress.com It includes blog posts and videos of people in Scotland speaking about their own U.Lab experiences.